When my daughter was 3, we found out that I was pregnant again. At my first ultrasound, I received the shock of a lifetime when they told me I was having twins. At that time, they also noticed that one baby was measuring larger than the other, so I was scheduled to go back again in a couple weeks to make sure that the little one was catching up. Unfortunately at my follow up, the doctor saw a continued issue with the smaller baby’s growth.

From that day on, I was transferred to a team of specialists that found one thing after another wrong with one of my babies. As all of the bad news began to pile up week after week, we knew we were going to have to prepare our daughter for the awful truth- one of her baby brothers was not going to survive.

Due to several birth defects our son had developed in the womb, we took the approach of telling her that Jesus needed another angel to help him in heaven, and he created our baby with a special heart that wouldn’t work properly on earth. Trying to explain this to a 3 year old was beyond anything I could have imagined doing. And there is nothing in this world that could have prepared me for her response.

She didn’t say a word.

She sat there and tried to process what we had said. She didn’t cry, she didn’t ask questions, she just shrugged her shoulders and whispered “ok”.

So I did what I thought was the right thing, and kept talking and repeating what we had said, hoping she could understand what we were telling her. But what I didn’t know was that she understood completely. She just needed time to process her thoughts before talking about it. If I had known this, I would have kept my mouth shut and let her have some time to think. But I did not. I talked until she got upset and ran away from me. Which broke my heart even more.

Throughout the coming weeks, we continued to talk about our boys as a family. After the initial shock, my daughter started to open up and ask more questions. I found that I couldn’t lie to her, or keep anything from her. So we explained everything we could in terms she would understand. And even though sometimes it made her sad, it mostly helped her to feel included in what we were going through. She knew she was an important part of our family, and that we needed her to help us through what was happening.

Though every child is different, I found that being as honest as possible with my daughter helped her to understand and be included in the grief our family experienced.

Today, my surviving twin is 4, and my daughter is 7. And they both still talk about their brother every single day. They keep his memory alive, and bless me everyday with their love and kindness for a baby they never got to know. We say his name and talk about him often, and make sure that they both know they can always ask questions, cry, or express anything they are feeling. 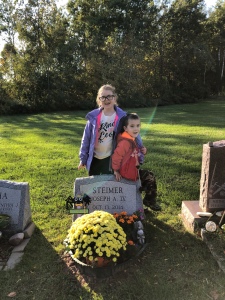 Teaching children to be able to talk openly with their parents about their emotions is so important. Be sure to not judge their feelings or responses to loss. If you are not supportive of open communication with your child, it will teach them to keep everything inside, which can cause them to shut down and keep their feelings bottled up.

We all need a safe sounding board to express our feelings, no matter what the situation. Children are no exception.

How Life Has Happened For Me

Grow Through What You Go Through

Teaching Others How to BE Inclusive

Breaking the Chains of Alcohol Abuse

Conversations on finding and loving who I am

Let's have an open conversation about life.