How many parents out there love taking their kids trick-or-treating on Halloween? How about in the rain? No? Me neither.

So this year, when my son made it 1/2 a block and then wanted to go home because his legs were tired, I looked to the sky to thank the heavenly angels for watching over me. I tossed the umbrella to my husband to stay dry as he continued on with my daughter, and we headed home. I just about ran and dragged his tiny legs behind me. Though I love seeing all of the adorable kids in their costumes, I’m a weenie and get scared at anyone being the slightest bit spooky. A father and son sitting in their garage wearing horse heads while playing checkers? No thank you. A stack of talking pumpkins? Nope! Throw a clown in the mix and I’m crying like a baby.

He was so excited to snuggle up on the couch with his candy and some tv, and I was more than happy to indulge in a glass of wine while we waited for the doorbell to ring. 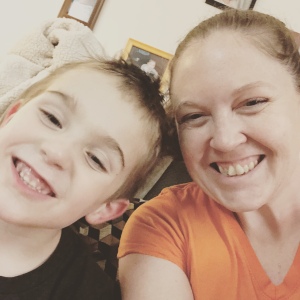 The doorbell never rang, so I reassured my heartbroken son that it just meant we got to eat more candy. He perked right back up and continued chowing down on the chocolate. Silly me gave up eating candy for the last three months of the year, so I filled the void with a second glass of wine.

Last year, we got out of trick or treating because my kids were sick of being in their costumes all day at school, and didn’t want to put them back on. We ended up going to the grocery store and handing each kid a bag in the bulk candy section. It costs us a lot more than having them beg for free candy from strangers, but it was much less stressful. We ate our expensive candy while watching a movie in the comfort of our living room. It was pure joy.

This year, we managed to go trick-or-treating, let the kids eat some of their haul, and got both kids in bed and asleep by 8pm. I’m fairly certain that I should receive some sort of award for that.

Now that, is living the dream.

How Life Has Happened For Me

Grow Through What You Go Through

Teaching Others How to BE Inclusive

Breaking the Chains of Alcohol Abuse

Conversations on finding and loving who I am

Let's have an open conversation about life.